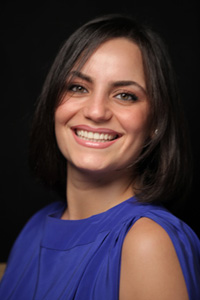 Odelia Mirzadeh is a Speech-Language Pathologist with both a Bachelor of Arts (B.A.) and Masters of Science (M.S.) degrees in Communication Disorders from California State University Northridge (CSUN) with a minor in Music Therapy.

In terms of the adult population, she evaluates and treats: speech and language disorders resulting from stroke and head trauma, such as aphasia, dysarthria, cognitive deficits, dysphagia (swallowing disorders), as well as voice disorders.

Odelia has been a music instructor for 13 years and has extensive training in music (more specifically piano pedagogy). With her background in music and training in music therapy, Odelia is able to better serve her client’s needs in an innovative way to ensure better results.